If you’re a fan of Rick and Morty, which I assume you are as you’ve clicked on this article, you’ll be well familiar with the pain of waiting for season three to kick off. The fake announcements, the Photoshopped Justin Roiland Tweets, the misleading click-bait articles … we’ve seen them all.

At this point, most of us have already taken to crying in a corner and accepting the inevitable – season three is never coming. We ruined it. All our dicking about and annoyingpestering the animators must have pissed them off so much that they’ve decided to simply sack it off and let us suffer.

But after every dark cloud there’s a glimmer of hope – quotes from Harmon and Roiland about how much they love making the show, how they’re currently drawing it, how they can’t wait to show it to everyone. Well, if that’s the case…

While we’re no closer to a release date, IMDb has seemingly confirmed the first episode will be an hour-long special with this newly-uploaded description of season three’s premiere. 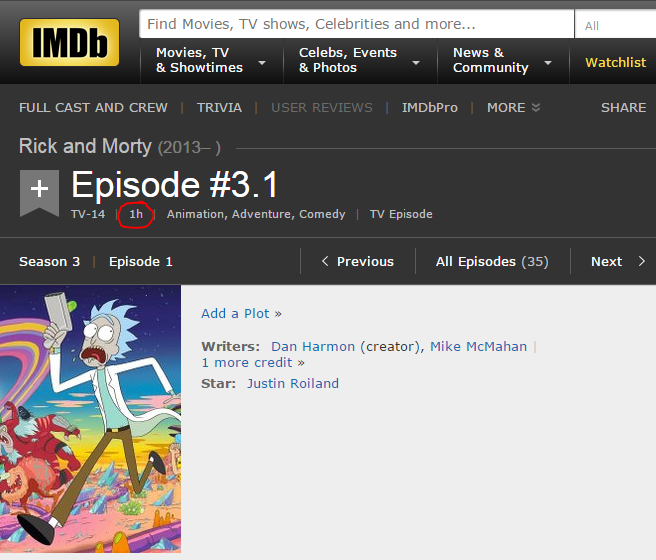 As IMDb is a fairly reputable site, this news obviously sent the Twittersphere into absolute meltdown. So much so that the official Rick and Morty sub-Reddit has had to release a public service announcement.

They wrote: “Recently we’ve seen a bunch of posts citing either IMDB, Wikipedia or a shopped Justin Roiland tweet claiming various Season 3 release dates (specifically April 24th and May 17th) so just to be clear:

“Adult Swim has not said anything about when Season 3 will be released. There is no confirmed date and anything stating otherwise is incorrect.”

They continued: “When the date is announced, it will be through Adult Swim and will be plastered all over this subreddit. It’s not going to appear suddenly on IMDB with no other sources confirming it, or at the bottom of a cereal box in some code that you’ve deciphered.

“Posts with false release dates will be removed to curb misinformation.

“Feel free to ask any questions in this thread, unless you’re asking when Season 3 is going to start because we don’t know.

“If you are experiencing extreme difficulty during this wait, you might want to reach out to a Venture Bros fan for advice.

“We are here if you need to talk.”

Shots fired. That’s pretty clear. I get it. But even though we’re no closer to a season three release date, I imagine this little nugget of information on IMDb will be more than enough to keep ‘Rick and Morty Schwiftposting‘ busy for at least three months.