Japandroids at the Kings Arms
Review by Michael O’Connell

Japandroids returned to the stormy shores of New Zealand to play the Kings Arms on Friday night in the midst of turbulent winter weather perfectly echoing the power and raw energy the Canadian two piece have become renowned for. Japandroids seem to be one of those bands that could not be more suited to the ill fated Kings Arms; loud, sweaty, and one of the few bands that can squeeze onto the cozily sized stage without being shoulder to shoulder with your bandmate.

Rocking a bit of Kiwi flavour, guitarist and singer Brian King took the stage sporting a Flying Nun Records tee, wasting no time in launching into the title track of their early 2017 released their third album Near The Wild Heart of Life. The song appears almost perfectly written as a live opener, firing up the band and crowd with its anthemic nature. In this, it would appear the band have perhaps found a live opening song to stand along side and bookend crowd favourite and go to closer from 2012 “The House That Heaven Built”. The track also immediately shows of the frantic heavy hitting of drummer David Prowse, with the fullness of sound leaving you wondering whether it should be possible for two guys to bring together so smoothly the sheer level of noise being achieved.

Near The Wild Heart of Life has provided the band with a much broader live catalogue in terms of tempo and sound, although the live dynamic of a single guitar and set of drums pulls the more polished aesthetic and production values of their newest album back to a more level playing field. Whilst the style of songwriting from NTWHOL is easy to pick in more classic rock styled tunes “No Known Drink” or “Drug and North South East West”, the trademark live sound remains constant, tying the setlist together.

The set is heavily laden with newer material, the bulk of which not only stands up well in terms of sound and reception to more well known and loved tracks from freshman sophomore albums Post-Nothing and Celebration Rock; but at times seems to provide a greater sense of direction for the band in a live sense. It wouldn’t be unlikely to start seeing previous staples of Post-Nothing becoming rarer in the live arena; notwithstanding “Wet Hair” being a personal highlight of the evening, as well as Celebration Rock staple bangers “Younger Us” and “Continuous Thunder” clearly gaining the appreciation of the crowd.

Possibly the most excited person in the house may have been one who was paid to be there. A young bartender who appeared to be living out a musical wet dream, climbing up onto the bar to headbang out the closing numbers, bringing a vibrancy to the back of the bar which otherwise was at times fairly subdued.

The inevitable closing number, “The House That Heaven Built”, made sure that the entirety of the crowd was on their toes, and to a point highlighted how subdued aspects of the crowd had been throughout the night. The lasting popularity of the band’s signature tune will always be difficult to escape, but with good reason. In releasing Near to the Wild Heart of Life, Japandroids have not only expanded on a solid body of punk driven classic rock tunes, but have given a greater depth to their live performances whilst remaining true to the simplicity and rawness of their sound.

Check out our photos gallery of the Japandroids gig by clicking on the image below. All photos by Gavin Walker. 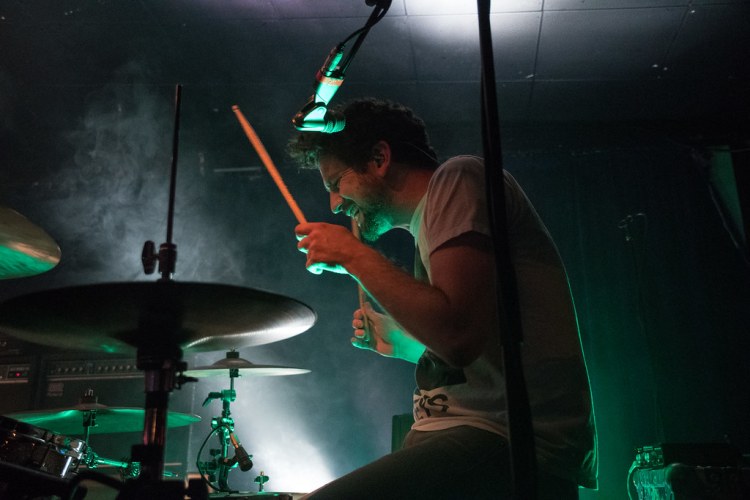